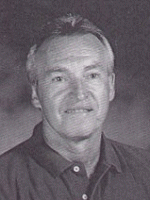 Lewie Benitz had his introduction to wrestling while a student at Boyceville High School, Boyceville, Wisconsin. Lewie attended the University of Wisconsin-Stout in Menomonie, Wisconsin. Lewie earned both his bachelor's and master's degrees in Industrial Arts Education from Stout in 1965 and 1966.

Lewie competed on the Blue Devil wrestling squad, was a 4 year letter winner and captain his senior year. While in graduate school, he coached at Menomonie High School, Menomonie, Wisconsin. Lewie took his first squad to a dual meet record of 11-0-0.

His dual meet record at Rapids is 249-28-2. His teams have won 16 Wisconsin Valley Conference, 17 WIAA Regional, and 13 WIAA Sectional championships. Lewie has produced some fine wrestlers of which he has seen 105 state qualifiers and 52 place winners. Of these individuals, 21 became finalists and 10 became WIAA State Champions. Lewie had the privilege to see one of his former wrestlers, Jack Reinwand, become an NCAA National Champion.

Rapids teams have placed or been rated 6th or better in the past 17 consecutive years. His 1986-87 squad holds a national tournament record for the most points -- 347, at the Bi-State Classic at LaCrosse, Wisconsin.

In addition, Lewie has found time to spread his knowledge and coaching experience around. He is frequently featured as a clinician at wrestling camps and coaches' clinics. He has been featured in national periodicals and frequently writes articles at the state and national levels.

Lewie ha helped coach the Wisconsin Wrestling Federation state team to the Junior Nationals. He was instrumental in starting the W.W.F. State Kids program and plays host to the state kids and cadets tournament.

Lewie and his wife, Joyce, own Wisconsin Resilite, selling and reconditioning mats.