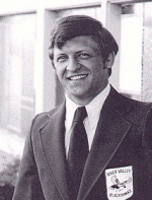 Rick Lawinger, a name that will stay in the wrestling historical records. Rick exemplifies a drive and determination that every wrestling coach wishes they could see or instill in their wrestlers. It is fitting that Rick Lawinger be inducted to the Hall of Fame.

Al Bauman, from Mineral Point and Rick's high school wrestling coach is quoted as saying, "Rick belongs in the Hall of Fame as a last of a group of wrestlers recruited by George Martin and the first to accomplish George's dream of an NCAA championship." It is fitting that Wisconsin's first NCAA championship be a product of Wisconsin. Duane Kleven from the University of Wisconsin-Madison and Rick's collegiate coach, states, "I believe that Rick Lawinger is the best single example of George Martin's effort to build Wisconsin wrestling, a pure Wisconsin product going all the way to the top of the national wrestling world, then going on to be a successful Wisconsin wrestling coach."

In international competition Rick competed in the 1973 World University Games. Rick was a Bronze Medallist in Moscow, Russia.

Rich retired from competition in 1974 and began coaching at River Valley High School. His teams were rated number one both in 1978 and 1979. His team compiled a dual meet record of 65-9. His teams placed in the top 5 three times and earned the runner-up trophy in 1978. He coached eleven state place winners including two-time state champion Dennis Limmex.

Rick retired from coaching in 1980 to run his own business in Spring Green, Wisconsin.

Mineral Point - Richard A. Lawinger, age 67, of Mineral Point, passed away peacefully on Tuesday, July 21, 2020 at Upland Hills Nursing and Rehab in Dodgeville.

He was born to Bill and Helena (Salzmann) Lawinger on July 30, 1952. He grew up on a Dairy Farm south of Mineral Point where the value of hard work was instilled in him at a very early age by his father and his overwhelming kindness to people by his mother. His youth consisted of hard work alongside his parents, brothers and sisters, his proud accomplishments as an Eagle Scout and his love for the outdoors that was given to him by his Grandpa Will. In 8th grade his father sold the cows and free time presented the opportunity for sports. At that point hard work, determination, and his natural ability to analyze a situation set the stage for his success throughout life.

Rich attended St. Mary’s Catholic grade school and graduated from Mineral Point High School where his passion and commitment for anything he decided to do was showcased. He first stepped foot on a wrestling mat as a Freshman in High School for Coach Al Bauman, his Senior year he finished the 1969-70 season undefeated and captured the state title at 145 pounds. His drive and the support he had from all of those around him to achieve his goals also earned him the honor of being the Pepsi all American athlete.

Richard was the first in his family to attend college. He was fortunate enough to share the experience with his brother Steve who would soon join him not only in college but also as a UW Badger wrestler. He attended the University of Wisconsin-Madison, where his forever lasting friendship began with head wrestling coach Duane Kleven, assistant coach Russ Hellickson and countless teammates and the foundation was created for Wisconsin Wrestling. Richard became Wisconsin’s first National Champion in wrestling in 1974. A Big Ten Conference champion in both his junior and senior seasons, he was a three-time team MVP and ranks fourth in UW history with an .882 career winning percentage (130-17-1). He also won a bronze medal in freestyle wrestling at the 1973 World University Games. After graduating from UW-Madison he went on to teach at River Valley School District and followed his competitive wrestling career by coaching at River Valley High School from 1974 to 1980. As a coach at River Valley, he motivated his team to the state’s No. 1 dual meet team in 1978 and 1979. One of his greatest accomplishments was the group of friends, fans, and supporters who would become his lifelong family that he was eternally grateful for.

Richard was a natural motivator and his ability to inspire you to reach your goals was unmatched. He believed in you and he made you believe in yourself. To all those that were fortunate enough to know him along his journey through life, he believed he was truly the fortunate one for having crossed paths with you.

Richard went on to share his passion for farming with his brother Nick for over 20 years as they raised hogs together. The value of hard work and determination they both acquired from their father and mother continued throughout this time as they grew their business to over 13 locations across Southwest Wisconsin. After leaving the farming business Rich found himself in another profession he not only excelled in but had the passion and drive for while working for Lawinger Law Office in Vandalia, IL founded by his sister Jane. The incredible contribution of knowledge he provided to the clientele of Lawinger Law Office for 13 years as a paralegal was apparent in the outcome of their cases. His loyalty and kindness toward his co-workers and individuals he met along the way created lasting friendships. During this time in Vandalia he also had the privilege to be a part of his niece Miranda and nephews Alex and Gabe (godson) childhood and that added such joy to his life.

Rich found real joy in having great conversations with individuals he would cross paths with and was always more interested in learning about their life and what brought joy to them. He enjoyed watching his grandchildren’s sporting events, attending area wrestling matches with his childhood teammates and friends, spur of the moment outings with his niece Tammi, visiting sister Patti for Coffee at the Red Rooster, hayrides at sister Ann’s, cookouts with brother Billy, catching up on the latest “chit chat” with family and friends, playing Sunday night cards with Aunt JoAnn and cousin Annie Weier, and countless stories told with his brothers and his son Adam at family gatherings.

Above all, Richard most enjoyed his family and friends. His greatest joy was being a father, a Grandpa, and Great Grandpa. Rich shared his value of hard work and love of the outdoors with his son Adam, his nephew Alex and was just beginning to with his grandson Bo. His time spent hunting and fishing with his son Adam was one of his greatest loves in life. He found great joy in discussing his shared love of farming with his grandson Earl. His sense of humor shared with his son Adam and grandson Bo could have you laughing for hours, and usually at something only they really thought was funny. His passion and competitiveness for sports created a special bond with his grandson Bo and is seen in his grandsons Jarren, Dawson and Dreydon. He would come to life every time he watched his grandchildren on the court, on the field and most definitely on the mat. His foundation of hard work and kindness is so apparent in his granddaughters Tessa, Destiny, Daelynn, Danika and his great grand-daughter Aubri Jo. The world is a kinder place and his love for life continues through all of his grandchildren, his great-grandchild and his children.

Richard is preceded in death by his parents, twin sisters Mary Beth and Mary Helena, nephew Will and his very special friend Patricia Schmidt.

A Public Visitation will be held from 5:00 p.m. until 8:00 p.m. on Friday, July 24, 2020 at the GORGEN-McGINLEY & AYERS FUNERAL HOME in Dodgeville. With COVID 19 concerns in mind, friends and family attending are encouraged to wear face masks and apply social distancing as a safety precaution. If you don’t wish to travel, or if you have special memories of Rich, please consider leaving the family a short message on the funeral home website.

Saturday's Private Family Mass will be live streamed at 11:00 a.m. at the following link:
Streamed at St. Mary's/St. Paul's