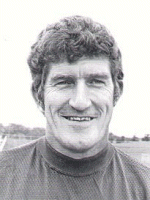 Willie Myers is currently head-wrestling coach at the University of Wisconsin-Whitewater. Myers is recognized for his excellence on the highest level of small college wrestling. He is highly sought after as a speaker and clinician, and annually directs a summer wrestling camp on the Whitewater campus.

Beginning with his first year as coach of the Warhawks, Myers won 8 Wisconsin State University Conference titles, the first championship in 1969 earned Willie the National Rookie Coach of the Year honors for all colleges and universities. The 1979-80 team won Whitewater's seventh consecutive WSUC title, a feat never before accomplished in the league.

Willie's outstanding coaching ability has been recognized nationally. He was named NAIA District 14 coach of the year 5 times, and was chosen to coach the NAIA's exchange team, which toured Japan and Korea in 1975. During 1977 Myers coached the World University Games Freestyle Wrestling Team, which represented the U.S. in Sofia, Bulgaria. He also served as president of the NAIA Wrestling Coaches Association, the NAIA representative on the executive committee of the U.S.W.F. and NAIA representative to the U.S. Olympic committee.